Once again, all eyes turn to Rio de Janeiro. After receiving Anne Hathaway, Jamie Foxx and Jesse Eisenberg for the premiere of the animated film "Rio", the city now welcomes the cast of "The Fast and the Furious 5.” The movie shot several scenes in Rio and the actors are returning to the country for a marathon of events to promote the fifth film of the series.

* And the list of celebrities coming here isn’t small: Vin Diesel, Paul Walker, Jordana Brewster, Ludacris Bridges, Tyrese Gibson, Sung Kang, Gal Gadot, Matt Schulze, Tego Calderon, Don Omar and director Justin Lin. They will arrive on the 9th to Rio de Janeiro, have a press conference at the Copacabana Palace on the 13th, and grant a series of interviews to national and international press, "Entertainment Tonight" and "Today Show" are already confirmed, with sights such as Ipanema and Sugarloaf in the background.

* And to wrap it up in style, there’s a screening of the movie at Cinepolis Lagoon, at Lagoa Rodrigo de Freitas, where there’s a party afterwards. You need a lot of energy to follow this fast marathon in Rio de Janeiro! 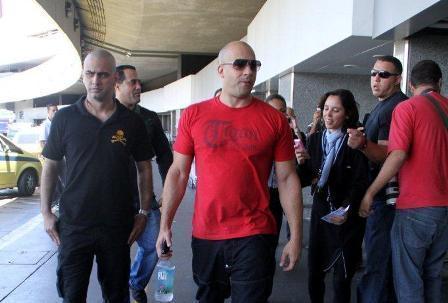