"Rio police did a great job," said Vin Diesel as he began to applaud, but wasn’t followed by anyone at the press conference of the movie "The Fast and the Furious 5" on Wednesday, at the Copacabana Palace. The film’s world premiere will be here in Rio, this Friday.

* The protagonist of the sequence said he loved Rio, rode his bike through Copacabana and took fans to the door of the hotel all week. In the press room, however, the mood was less, say, affectionate. He had to answer about showing stereotypes, such as a violent city and a mostly corrupt police force. "But we try to show the other side of it as well. We always have good and evil, as in all movies, "says producer Neal Moritz.

* Actress Jordana Brewster, whose mother is Brazilian, also became defensive: "When I saw the first scene, with Corcovado, I thought the city is beautiful. It has crime, yes, but this is the script, not because it is shot in Rio. " "When we filmed the fourth part in the Dominican Republic, tourism grew by 80% there. Let’s see what happens here," said Vin Diesel.

* In time, though it takes the name of the city under the subheading "Operation Rio," "The Fast and the Furious 5" only filmed in Rio for a week. Most of the work was shot in Costa Rica. 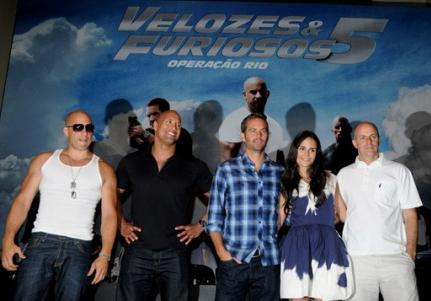