Karl Lagerfeld is unstoppable and now his newest project is as quirky as the others: shoot and tape a campaign for Magnum ice cream. To do so, Karl has recruited actress Rachel Bilson and model Giabiconi Baptiste, who were spotted at various tourist spots in Paris last Wednesday.

* Fashionistas who went by the places believed that all the production was on account of Chanel’s 2011/2012 winter campaign, but the numbers worn by Rachel weren’t showcased at Paris Fashion Week just a few weeks ago. Wearing tulle, leggings and ballet shoes, the actress and model star in the video inspired by the blockbuster movie "Black Swan." 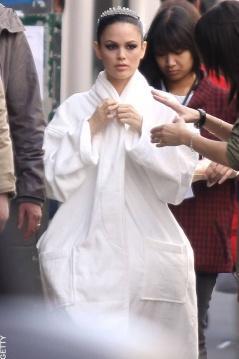